This event in my life pushed me into passivity. I would take a back seat in many areas of my life. I played in a local band and tried many things to cover up what was going on inside. When I was 14 years old, I met a girl named Rena Fulmer. This was another major turning point in my life. Things changed. I now had this wonderful girl that truly cared about me and gave me purpose. After a few years, I asked her to marry me, and she said yes. I was going to a local college, working full-time, and balancing my relationship. All the while, I was still in many ways a very passive person. I kept wondering how I would ever have the money for us to get married. I kept moving forward, trying my best, but feeling as though I was getting nowhere. One evening I was talking with Rena’s father, and he asked me if I ever thought about joining the Army. It had never crossed my mind until that point. A few weeks later, I walked into the Army recruiting station and told them I wanted to join. As you can imagine, they had no issue with helping me. So, on August 20, 1993, I joined the Army.

After graduating basic training, Rena and I were married. Our first duty station was Fort Hood, Texas, 750 miles away from Alabama. Things were great for a while, but being a passive person, I would let things sit and not deal with them. Rena and I had some issues in our marriage, but I would pretend as though they did not exist. While at Fort Hood, our daughter, Taylor, was born. This was another major event in my life. Again, this did not fix the issues, we just focused our attention on our daughter, not resolving the issues. At the end of 1997, I received orders to Carlisle Barracks in Pennsylvania. This was exciting, but dramatic at the same time. Rena and I were as close to divorce as we could possibly be. It was only a matter of time.

Prior to leaving for Carlisle, my wife’s cousin invited her to a church service in Gadsden, Alabama. So she went.  The people there would clap, raise their hands, and were obviously excited about something. This began to get my wife’s attention. She invited me, and the same thing happened: I wanted what they had. They were excited about life. They were connected to Jesus in a way that I had never seen before. They were preaching from the Bible and pointed out to us that we needed to be baptized in the Name of Jesus for the remission of our sins. I had never heard this before, but if this is what it took to have what they had, I was for it.  So my wife and I were baptized and God filled my wife with the gift of the Holy Spirit (Acts 2:38). What a transformation!

We left for Carlisle soon after that with the name of a church that taught and believed this same message. When we got to Carlisle, we contacted Dave Huston from the church and began a Bible study. Our life together was changing. In March of 1998, Jesus filled me with the Baptism of the Holy Spirit!! He was making us into a new creation. He was removing the passive side of me. He began to restore our marriage. He also blessed us with a son, Hunter. Jesus became the father to me that was taken away in 1983. We began to feel what the folks in Gadsden were feeling.

Through reading, study of the Bible, seeking the presence of Jesus, and understanding what life is really all about, Jesus restored that which was lost in our lives. Today I am very active at Carlisle Christian Fellowship and serve as one of the pastors.

I grew up in a small town in Alabama in a home with a dad, mom, older brother, and two sisters.  My father was a carpenter and made a good living for our family. He was a hardworking man and taught me a lot about work ethic. At the end of March, 1983, all this changed.  On this day, my father had a brain aneurysm. I awoke that morning with a great dad and by the end of the day he was in a vegetative state. He died on April 1st and was buried on April 4th, my 9th birthday. This tragedy totally changed my life. Cars were reposed, we moved a couple times, finances were minimal.  My mom tried very hard, and did an excellent job, to raise us by herself.

​​My Testimony ​by Jamie Hulsey 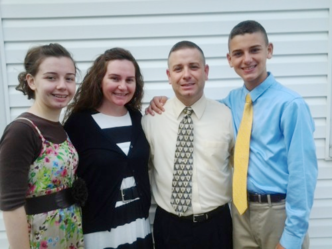