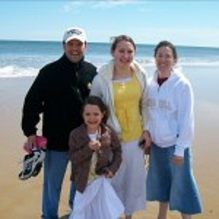 ​My Testimony ​ by Brian Schrift

It all began back on May 30, 1972, when I was born to my parents, Claude and Jean Schrift. I grew up in Annapolis, MD, the youngest of six children: three girls and three boys. My childhood was fairly normal: a fishing trip here, a hunting trip there, a lot of friends in the neighborhood, playing Lacrosse.

All in all, not a bad childhood. I always knew, however, that there was something missing in my family’s life as there was no consistent peace or joy in our home.

In 1982, when I was ten, my parents allowed me to get a paper route for the local newspaper called the Evening Capital. I delivered newspapers until I was 13. During that time my supervisors name was Jim Reyback (he looked like Abe Lincoln…kind of).

From there I muddled through my teenage years, with not a lot of direction. When I graduated high school, I went into the biggest identity crisis of my life. I always thought I wanted to be a doctor, but, I was not sure what was in store and quite frankly I was at the point of not really caring a whole lot about it. I just wanted to go to college, to have a good time, and if a bachelors degree just happened to fall into my lap…well, I would take it.

That was not what happened at all, however. I thought I had it all together, but after giving college a half-hearted attempt and the partying life a whole-hearted attempt, in 1995 at the ripe young age of 23 I decided to pack my bags and move to Seattle. It was there that I met the woman who would be my wife and the little girl that who be my oldest daughter.

In April of 1998, after a short visit with my family the year before, Michelle, Mary, and I decided to move to Pennsylvania. We liked the area, the cost of living was low, and we would be close to our families. Soon after we moved, Michelle began planning our wedding. So in the spring of 1999, I was assigned the task of finding someone to marry us. Since we wanted to get married in our back yard, we needed a pastor who was willing to drive out to our house. I now realize that this was our way of saying, “We have not been to church in a really long time and we have nowhere else to get married.”

One spring afternoon I picked up the Carlisle phone book and looked under pastors. I landed on the listing for a local pastor here in Carlisle named Dave Huston. I called him and asked a few general questions: Will you marry me and my wife? Sure. Will you marry us in our backyard? Sure. How much will it cost us? Whatever you want to give me.

My immediate response was, SOLD! He proceeded to tell me, however, that he would like to meet with us to do some premarital counseling. My response may not have been the warmest, but I agreed to it. Soon after that we went to our first premarital counseling session. Once we arrived at the church building to meet with Dave, he began the conversation by asking where I was from, and I told him Annapolis, MD. He said, “That’s funny, so am I.” He proceeded to ask me what my profession was, and I told him that I was in the restaurant business even back in Annapolis.

Dave went even further than that and asked what I did when I was a kid. I told him I delivered newspapers in Annapolis for the Evening Capital from the time I was 10 to 13, from 1982-1985. Dave told us that he too worked for the Evening Capital those same years. He continued and asked me who my boss was, so I said it was Jim Reyback, the guy who looked like Abe Lincoln.

Dave proceeded to tell me that at that time, he was Jim Reyback’s boss! Now, I don’t know about you, but at this time, God started to speak to me in little ways that I could not recognize at first. This was more than a coincidence, this was more than happenstance. What are the chances? Grow up in Annapolis, move 3000 miles to Seattle, move back east “by chance” to Carlisle, and sit in front of the pastor who is to marry Michelle and me, who “by chance” happened to be the boss of my childhood paper route manager.

As we went through the pre-marriage counseling, I didn’t feel that it was doing any good, as I thought I had all of the answers to our issues and we were walking into to our marriage with all wisdom. Right. I think not.

We got married in October of 1999. Dave put us on the church mailing and invited us to the Easter service in the spring of 2000. We left half way through the service.

On August 10, 2001, we had an addition to our family, Ryley Ana Schrift. In the mean time, Dave and I remained in contact and in December of 2002 we received an invitation to the Christmas program, “A Lambs Tale.” On this occasion we were introduced to Dave’s daughter, Andrea, and her family. Low and behold, Andrea’s husband, Don, grew up in Annapolis too and knew some of the same people I knew. From that point on we began a friendship with Don and his family.

This is when God really began to work. Don became a friend and started to show the light of Jesus and how it brought peace and joy into his life. I knew that Michelle and I were ‘coming up short’ in our lives and that there was something, a void, an empty place, where we were just complacent, sad, angry, but never truly happy.

We soon got involved in a home friendship group and then a Bible Study. On February 8, 2004, Don and Andrea were teaching us a Bible Study and going over how to be born again. That’s when the light went on for Michelle and I. It was 9:30 at night sitting at a dining room table. No thunderous voice. No lightning striking. Just the still small voice of understanding showing me the way into everlasting life. That night we both got baptized in the name of Jesus Christ (Acts 2:38). A short time later we both received the incredible gift of the Holy Spirit.

This is my testimony, this is how God brought me out of sin. Although Jesus knew us even in the womb, He also knew every step we would take until that cold night in February when I was baptized in His name. You see, God knows the beginning and the end. Why do we so easily forget where we came from and where Jesus has brought us to? We should never forget how merciful He has been, how patient He has been, and how much grace He has supplied for us. Jesus is no respecter of persons, situations, or lifestyles. All he wants is your heart to be in the right place so you can come to know Him.